Twitter Busts John Kasich For His 'On Many Sides' Nonsense

"Both Sides are equally bad."

It amazes me that everytime Morning Joe in particular, hosts someone pushing this lie, they say nothing to push back.
.

It's almost as if 'Morning Joe' chooses guests who will push both siderism because it's the argument of choice for their program.

The same Joe Scarborough who helped Donald Trump WRITE his last "reset" speech to Congress in March of 2017? Rode over with Trump to the Capitol? Sat on the floor, not the gallery, to give Donald a standing O?

NOW Scarborough is an independent.

And Kasich uses the terms "hard right" and "hard left" and "both sides" and "partisan." And then he makes this strawman false choice argument:

"I hear it from everybody.... 'The press is biased.' What would you rather have, no press?"

Hey John Kasich, I would like a "press" that doesn't allow a Republican, always a Republican, guest to run to BothSiderist Island everytime dear leader poops the bed.

So would lots of people.

John Kasich with the “both sides” bs. One party controls all three levers of government. One party has a reckless Neanderthal in the highest office who’s incapable of leading and ONE party will not serve as a check against him. Spare me the both sides crap. #MorningJoe

@Morning_Joe Screw you John Kasich - there is no 50/50 "hard left/hard right" - this entire problem is hard right and their propaganda machine on the right of Foxnews and Rush Limbaugh !!! Your GOP is destroying this country

I want to like John Kasich because I want to believe we could return to sanity in politics. But his message on @Morning_Joe is that “both sides” have become too extreme, and that’s BS. The Dems remain a center-left party. GOP is off the charts.

kasich has no real gop constituency, he just wants to eat a lot and hang out with reporters https://t.co/clPqSyb98S

Governor, are you running for president in 2020?

"I don't know what I'm doing." Oh yes, he does. He's building the lifeboat for the GOP to "reinvent" themselves after Trump. 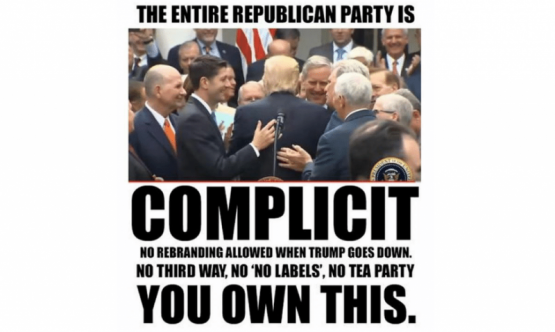 CNN's New Day brings in Joe Lieberman to play the "both sides" game following the deadly shooting at a Pittsburgh synagogue.
By Heather
comments
Oct 29, 2018

Kasich Goes All 'Extremes On Both Sides'

John Kasich can't talk about how awful his own party is. So...both sides!
By Frances Langum
comments
Jan 30, 2018

Chris Christie took the "both siderism" meme and turned it on its head by comparing an energetic young politician trying to help the country to the despicable mob that coalesced at CPAC who cheered the death of Sen. John McCain.
By John Amato
comments
Mar 06, 2019

Of Course Chuck Todd Tries To 'Both Sides' The Shutdown

But Twitter shut him down right quick. Which is progress.
By driftglass
comments
Jan 19, 2018

Morning Joe hosts former Rep Jason Altmire, the author of "Dead Center" about centrism and how terrible it is that "both sides" can't compromise. Because OF COURSE they do.
By Frances Langum
comments
Dec 28, 2017